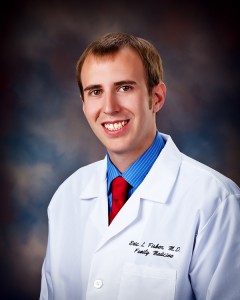 Dr. Eric Fisher joins the Glasgow program via the University of Louisville School of Medicine. He received his undergraduate degree in Molecular/Cellular Biology & Political Science from Vanderbilt University in Nashville, Tennessee. During medical school, Dr. Fisher received many honors and awards, including the Stodghill Academic Scholarship. He was elected into the Alpha Omega Alpha Honor Medical Society during his senior year. He first began volunteering with Habitat for Humanity in high school and hopes to continue doing so during residency and beyond. He is married to Brittany, and they have one son James. Dr. Fisher’s hobbies include golf, tennis, fantasy football, target shooting, and spending time with his family.